Det. Const. James Fisher, pictured here in 2014, is a 29-year member of the Vancouver Police Department. He was charged Thursday with sexual exploitation and sexual assault. (CBC)

Det. Const. James Fisher was arrested Wednesday and faces three counts of sexual exploitation, one count of sexual assault, one count of breach of trust and one count of attempt to obstruct justice, according to court documents obtained by CBC News.

Vancouver Police Chief Const. Adam Palmer said one of the victims is a juvenile and another an adult.

Palmer called the charges against Fisher “very troubling news” and said they are “not reflective of the other members of the police department,” at a hastily called news conference on Thursday.

Fisher — a member of the force for 29 years — has now been suspended from duty.

In 2015, Fisher received a Chief Constable Unit Citation for “extraordinary dedication” for his work in the Counter Exploitation Unit.

He was the lead investigator in the unit’s recent human trafficking investigation that led to the conviction in September 2014 of Reza Moazami of 30 counts of prostitution and sex assault-related offences involving 11 young women between 14 and 19 years old.

Palmer said a fellow officer came forward with concerns about Fisher in March of this year and an investigation was immediately called at that time.

“The details I can share are limited, as the matter is before the courts,” said Palmer of the charges Fisher now faces.

Palmer also said that B.C.’s Office of the Police Complaint Commissioner was also involved in the case from the beginning.

“It is rare for a VPD officer to be charged with offences such as these,” said Palmer. “There is no information to suggest that another officer was involved.”

The charges against Fisher relate to allegations from August 2015 to November of this year. 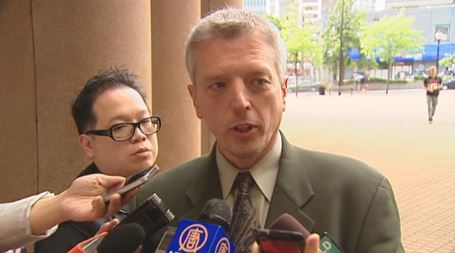 Detective James Fisher, seen here in 2011, was charged with sexual exploitation and sex assault in addition to other charges. (CBC)

Palmer denied that any Creep Catcher group — those that look to use false online social media accounts to out sexual predators — were involved in Fisher’s case.

But Vancouver’s top cop did say that because Fisher was involved in numerous investigations, the force will be reviewing those.

Fisher appeared in court Thursday morning, but the details of his bail hearing are subject to a publication ban.

The conditions of his bail, however, do prevent him from contacting the victims as well as several other people and agencies listed in the court documents.

His next appearance is scheduled for January 24, at Surrey Provincial Court.

Meanwhile, Palmer said he was very upset by the news about Fisher and tried to downplay the impact it could have on the reputation of his force.

“Every day, our officers are faced with very difficult and challenging situations,” said Palmer. “Our officers build strong relationships with the community, and they act with integrity, courage, compassion and respect.”

The Union of B.C. Indian Chiefs is demanding police investigate the government agencies whose alleged inaction led to the overdose death of an aboriginal teenager in Vancouver’s Downtown Eastside (DTES).

Provincial legislation states that failure to inform the government of a child needing protection is punishable by a fine of up to $10,000 and six months in jail.

Vancouver Police Chief Adam Palmer says that an investigation into Paige’s death is necessary and that it should be conducted at arm’s length by the RCMP.

Paige was born to a 16-year-old mother in Kamloops.

At 16, Paige and her mother moved to Vancouver’s DTES. At that point, the total amount of moves her mother made was around 84. Paige would go on to move an additional 50 times before her death.

Paige died of a drug overdose in a public washroom near Oppenheimer Park in the DTES at 19-years-old. Her mother died 18-months later. 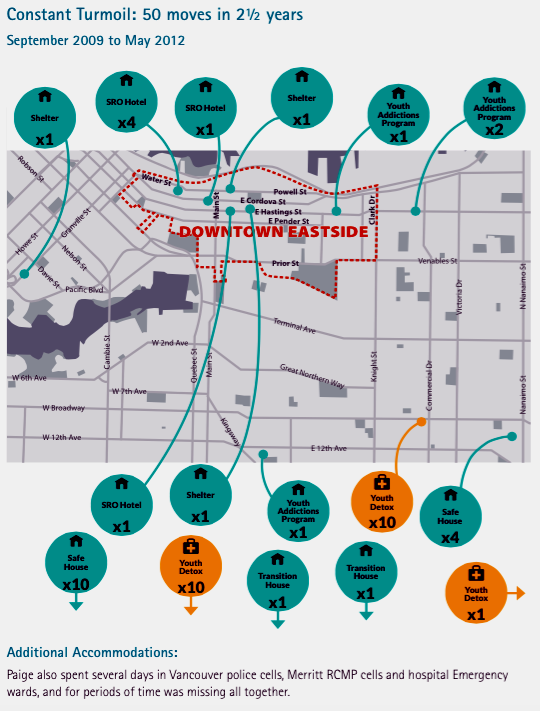 All of Paige’s moves in a span of three years

A report released earlier this year by B.C.’s Representative for Children and Youth slammed the province.

In the lengthy report documenting Paige’s plight, a critic says apathy, incomplete reports and inaction from ministry workers were significant contributors to her continual homelessness and eventual death.

The Representative for Children and Youth Mary Ellen Turpel-Lafonde submitted a 50-page report “Paige’s Story: Abuse, Indifference and a Young Life Discarded,” to the legislative assembly of B.C. and hopes staff working in several ministry agencies will use it to change approaches towards children, particularly aboriginal children, navigating the system designed to protect them.

Paige’s story reveals the massive gap between understanding of the effects of trauma and the systems at the front line — the social workers, police, school staff and health care providers. Professional standards of care were not upheld in how Paige was treated, the report says.

The report raises intense concerns about the professional judgment of those in the system. Paige’s suffering is detailed in the report and it will sicken every reader to know that this happened in Vancouver’s DTES, under the watchful lens of a social services system that should have done better.