Lana Fontaine sat on a stool outside her largely burned-down home on Saturday evening at a vigil for her daughter, Jeanenne Fontaine, who died on Wednesday after being taken off life-support. (Austin Grabish/CBC)

Fontaine, 29, and Shania Chartrand, 21, were both shot, killed in Winnipeg this week

When Kimberley Kostiuk thinks about the two young Indigenous women who were shot in Winnipeg within 48 hours of each other, she is afraid for her own daughters.

“I have two young daughters that are that age. I worry for them all the time. You just don’t know … what’s going to be next. Two young women shot and killed in one week,” she said.

On Tuesday, Jeanenne Fontaine, 29, was found in her home after she was shot in the back of the head, according to her family, and the house was set on fire. She was rushed to hospital but died on Wednesday morning, after being taken off life-support.

A vigil for Fontaine took place on Saturday at 7 p.m. outside her home on the 400 block of Aberdeen Avenue.

“We want the violence to stop. It’s enough, we are losing too many of our young women too soon. This shouldn’t be happening.”

Fontaine was the cousin of Tina Fontaine, the 15-year-old girl whose death sparked public outrage and calls for a national inquiry into missing and murdered Indigenous women and girls.

Sandy Banman was one of around 50 people who attended the Saturday evening vigil. Banman hadn’t known Fontaine or Chartrand, but came to support the families and community.

“It just seems like something has shifted in the last few years, where the crime [in the North End] seems to be getting extremely … violent,” she said. “It’s just absolutely shocking what’s going on here this week in the city, with Shania’s loss as well as Jen’s loss.”

A member of Winnipeg’s Urban Warrior Alliance, Banman said she’s been to too many vigils in the past. She wants to see change. 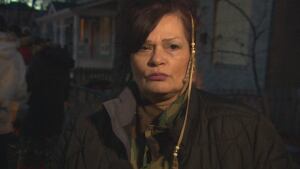 Sandy Banman, a member of the Urban Warrior Alliance, said she wants to see more accessible detox programs for men, women and families in Winnipeg. (CBC)

“We just keep saying over and over, ‘This has got to stop,’ every vigil I do,” she said. “We do these vigils because the community needs to heal as well as families. This violence has to end. It has to stop.”

“We need to be healing families so this kind of crime and violence will end,” she said.

‘They are human beings’

Kostiuk is a member of Drag the Red, an organization that started searching the Red River for bodies after Tina Fontaine was found there.

Kostiuk joined the group in order to heal and to help others after her 16-year-old daughter’s death in 2000.

While Fontaine struggled with drug use and had a criminal record, Kostiuk said she was also a mother and sister.

“You hear a lot of negativity also about these people but people don’t know them,” she said.

Kimberley Kostiuk says the violence needs to stop after two young Indigenous women were shot in Winnipeg within 48 hours of each other. (Tyson Koschik/CBC)

The vigil was intended to give the community an opportunity to mourn Fontaine and Chartrand and “remember the good that they had in them,” Kostiuk said. But they are becoming too frequent for the Fontaine family, she added.

“That poor family, I can’t imagine what her mother is going through right now,” Kostiuk said, adding the little cousins have lost too many family members.

“They’ve been to so many vigils already. They shouldn’t even have to think of this at a young age.”