In a stunning action that was long overdue, a group of native Navajo Americans chased Senator John McCain out of the Navajo Nation capital of Window Rock — making it perfectly clear he was unwelcome in the first place.

McCain was visiting the Nation in commemoration of Navajo Code Talker’s day, and perhaps for a moment thought he would get by listening to polite pleas from Navajo Nation President Russell Begaye and Vice-President Jonathan Nez to back a Congressional appropriation to fund the construction of a Navajo Code Talkers Museum. According to a report from Native News Online.Net, however, the Nation’s leaders chose the moment to focus on the EPA tragedy unfolding via the Gold King Mine spill into the Animas and San Juan Rivers.

Vice President Nez said the Navajo people naturally have a distrust of the government and noted the agency never formally apologized to the Navajo Nation for contaminating the tribal water source known as the “lifeline of the Navajo people.”

“This is just one mine out of hundreds and there’s no Superfund designation,” Vice President Nez said. “Right now, we don’t trust the U.S. EPA’s data and their collection.

Rather than responding at the formal event, McCain and the Navajo Nation leadership, both Executive and Legislative branches, as reported by Dusty’s Navajo Political Sphere, attempted to sneak off to the Navajo Nation Museum for a “secret meeting“:

“About 60 protesters and or more ran John McCain out of Window Rock today. Code Talker day was celebrated today and in attendance were McCain, NN Executive Branch and NN Legislative Branch. The whole group left to attend a secret meeting with John McCain at the NN Museum. The group was met with protesters who made it clear that giving our water rights away will not happen under our watch. The meeting, I am told, did not happen. Delegates, McCain and others went out the side door.

“There were about 50 NN Police, as well as County Police. Protesters took off in cars and followed McCain to the airport. The bridge to the airport was closed off.

“Bye John McCain! There are a lot of things on the Navajo Nation that our groups large and small are going to tackle. We cannot trust our Government, so we will make things right, ourselves.”

The Navajo mistrust of “Government,” especially McCain, is appropriate. Despite coming out recently in support of preventing a July “disposal” round-up of wild mustangs from the Tonto National Forest, (perhaps due to the loud chorus of outrage which emanated from horse-lovers), McCain demonstrated his truly greedy and inconsiderate nature when it came to native concerns by introducing an 11th hour amendment to the National Defense Authorization Act ceding sacred Apache land, Oak Flat, to a foreign mining corporation.

When the senator saw the protest sign, he ordered Mr. Tsinigine to “Get out of here, now!” The irony is blissful when viewed in retrospect, for McCain was met at the museum by a vocal crowd of outraged Navajos who weren’t about to let him quietly convene another closed-door meeting to bargain with the rights of their people. Protesters gained access to the museum and, though they were immediately subdued by police, by all appearances prevented McCain’s meeting from happening. Watch him run from the truth in this terrific video captured at the scene: 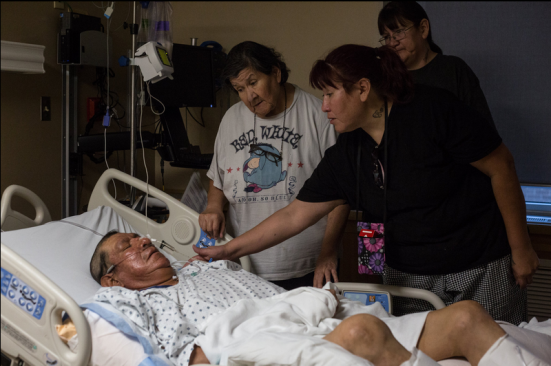 RIVERTON, Wyo. — Roy Clyde was sick of the homeless people who linger in this city’s parks, urinating in public and drinking bottles of vodka and mouthwash, he told the police. So on a recent afternoon, the police say, he grabbed his handgun, walked into an alcohol detox facility called the Center of Hope and shot two men as they lay on green floor mats, killing one and critically wounding the other.

Local officials called it a senseless attack on society’s most vulnerable fringe. But Mr. Clyde, a city parks worker, was white, and the victims were American Indians, members of the Northern Arapaho Tribe. Tribal officials here on the edge of the two-million-acre Wind River Reservation saw the shooting as a hate crime that added another page to a long history of violence and mistrust here in Indian Country.

“There’s a lot of animosity toward the Indian people,” said Dean Goggles, the chairman of the Northern Arapaho Tribal Business Council. “It’s always been there.”

After the shooting, Ron Clyde unloaded his gun, took off his shirt and walked outside, arms raised in surrender, to wait for the police to come, the police said.CreditTibby Mcdowell/The Ranger, via Associated Press

Local news forums discussing the case have swelled with condolences and calls for understanding, but also with accusations of bigotry and “race baiting” by people listing off crimes committed against, or by, American Indians in the area. The police and local leaders held a meeting last weekend to reach out to the homeless in the parks, but some residents said they thought the crime had only accentuated the divisions that can feel as constant as Wyoming winds.

“It should’ve brought people together,” said Cynthia Salazar, who was sitting with her family in a park one recent afternoon. “All I’ve seen are people on both sides. It’s not good.”

Tribal officials have asked federal prosecutors to investigate the shooting as a bias attack. (Wyoming has resisted years of efforts to pass state-level hate-crime laws.)

Had the two men been white, tribal officials say, James Goggles, 50, a cousin of Dean Goggles, would not be lying in a hospital bed, and Stallone Trosper, 29, would not be dead.

Mr. Clyde told the police he had gone looking for “park rangers” — a local slur that tribal officials say refers to homeless Indians. Many of the people who drink in the parks are Native Americans, as are about 85 percent of the detox facility’s clients, according to local officials.

The room where Roy Clyde shot Mr. Goggles and Mr. Trosper as they lay on green floor mats at the Center of Hope. Ryan Dorgan for The New York Times

But an arrest affidavit played down any racial motivation, saying that Mr. Clyde was “targeting transient people regardless of race.” Mr. Clyde, who is being held in the Fremont County jail, has not entered a plea, and his family members did not return phone calls or online messages.

Over decades, even as tribal members and nonmembers became neighbors and intermarried, the legal and cultural borders between them have defined struggles over environmental rules and property rights, crime and justice, and even the town itself.

Riverton was carved out of the Wind River Reservation for white settlement in 1905, becoming a city apart where alcohol is sold and 80 percent of its 10,000 residents are white. Tribal and nontribal residents eat at the same restaurants, are married into one another’s families and play video slots side by side at Wind River Casino. But middle-age Arapaho leaders who grew up on the reservation, population 10,000, have childhood memories of “No Indians” signs in store windows.

Tribal leaders said the shooting was the latest entry in a troubling ledger. They pointed to the case of a gay Northern Arapaho member who was beaten to death by two teenagers in 2013 in what his mother later called a hate crime; and to the case of a Northern Arapaho woman complaining of a pain in her head who said she was turned away from a hospital after staff members there failed to observe that she had been shot. In 2010, tribal members won a voter-discrimination lawsuit against the county’s elections system.

Riverton was carved out of the Wind River Reservation for white settlement in 1905, becoming a city apart where 80 percent of its 10,000 residents are white. Ryan Dorgan for The New York Times

In his ruling on the voting case, Judge Alan B. Johnson of Federal District Court wrote that “discrimination is ongoing, and that the effects of historical discrimination remain palpable.”

Days after the shooting, Northern Arapaho leaders met with elected leaders and law enforcement officials from the area to talk about what to do next. Richard Brannan, a tribal council member, said it seemed as if most of the non-Native American officials did not see the discrimination that the Indian leaders felt so viscerally. Tribal leaders and the Riverton mayor, Lars Baker, met to try to find common ground. But Mr. Baker said he was not sure what “common ground” really meant.

The shooting happened in what city officials and nonprofit workers described as a cinder block sanctuary for people struggling with alcohol and drug problems. James Goggles, “Sonny” to his friends and family, was a Navy veteran. Mr. Trosper was shy and kind, said his uncle George Abeyta, and was hoping to start community college to study political science.

Mr. Clyde, the man charged with shooting them, had worked for the city’s parks department for about 13 years, mowing lawns and keeping things tidy, said Riverton’s police chief, Mike Broadhead. About a week before the shooting, friends of Mr. Clyde noticed a change in him that coincided with a tense run-in between a female parks employee and one of the “park rangers.”

After the shooting, Mr. Clyde unloaded his gun, took off his shirt and walked outside, arms raised in surrender, to wait for the police to come, the police said.

“It’s like he’s just a guy on a mission,” Chief Broadhead said. “It was like, mission accomplished.”

Mr. Trosper’s uncle said the family sat in teepees with his body, offering prayers and hopes for his safe passage, before burying him last week. Mr. Goggles’s relatives are still cycling through his room at a hospital in Casper. He can barely speak, may be blind in one eye and may not walk again, relatives said.

Ben Piper, left, hugged Teddy Goggles, grandfather of the injured James Goggles, at a park in Riverton, Wyo. Many of the people who drink in the parks are Native Americans, according to local officials. Ryan Dorgan for The New York Times

The residue of the shooting has also stretched across Riverton and back to the park where a cluster of people — some family, some friends — were drinking in the shade. They had started with mouthwash that morning, but by 3 p.m. had moved on to a plastic quart bottle of vodka.

“We’re all park rangers right here,” said Vincent Lee Yellow Bear, whose two grown children shared shots with him. The conversation wandered: They had known Mr. Goggles — a good guy. They were not homeless, they just did not want to go to their homes. They were angry about the shooting, but said it would not displace them.