A sign is erected in Kanesatake, Que., where a housing project threatens a piece of land known as The Pines. (Steve Bonspiel/Facebook)

Frustration continues to mount in Kanesatake, Que., where residents of the Mohawk community are once again rallying to protect a stand of trees known as The Pines from encroaching development.

A protest was held on Tuesday near a housing project, Domaines des Collines d’Oka, about 60 kilometres northwest of Montreal.

The development is on land which is part of the Kanesatake Mohawks’ decades-old unresolved land claim.

The tension comes nearly three decades after an explosive and historic conflict erupted in the same area between the community, Sûreté du Québec and the Canadian Army.

“The government and all the Crown actors need to act to stop the land fraud that’s been going on for 300 years,” said Ellen Gabriel, a resident of the community who become known to many as a spokesperson during the Oka Crisis in 1990.

“Stop the development that is depriving this generation and will deprive future generations from enjoying our lands as they become privatized and urbanized.”

Gabriel said that on July 15, Indigenous Affairs Minister Carolyn Bennett agreed to visit the community, but no date for that visit was set.

According to a news release issued by the Mohawks involved in Tuesday’s protest, “Minister Bennett also stated that she did not know what ‘they could do.'”

CBC News asked Indigenous Affairs if the department would be intervening in the situation at Kanesetake, but has yet to receive an answer. 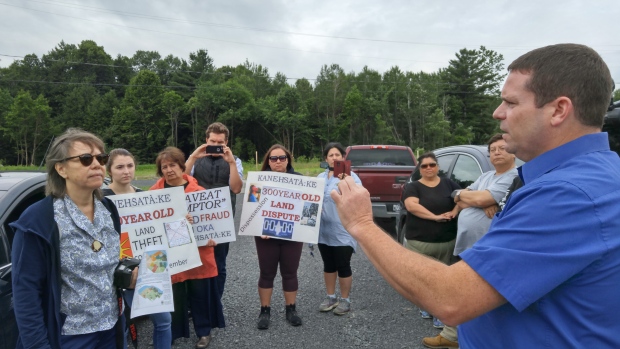 On July 12, the developer said the project is already three-quarters finished and an additional 20 homes are planned for the disputed land.

“[The federal government] is talking about reconciliation, but this is not a good example of reconciliation as far as we’re concerned,” Gabriel said.

Lac Simon Chief Adrienne Jérôme told the Viens inquiry Wednesday that women in her community ‘are afraid of the police, afraid to make a complaint. They don’t feel protected.’ (Viens inquiry)

Chief Adrienne Jérôme of the Lac Simon Anishnabe Nation, just east of Val-d’Or, Que., was testifying on the third day of the commission looking into relations between Indigenous people in Quebec and government services, notably policing and justice.

“They’re afraid of the police, afraid to make a complaint. They don’t feel protected.”

Montreal police investigated the complaints but no charges were ever laid.

Jérôme said that wiped away what little faith Aboriginal women had left in the justice system.

Adrienne Anichinapeo, the chief of Kitcisakik, another Algonquin community 120 kilometres south of Val-d’Or, said the women who had the courage to come forward to complain about police treatment in 2015 feel betrayed.

Chief Adrienne Anichinapeo of Kitcisakik, a tiny Algonquin community 120 kilometres south of Val-d’Or, said women who spoke out about police abuse feel betrayed by the system’s failure to act on their complaints and have been left to fend for themselves. (Viens Inquiry)

“These women have been left to fend for themselves.”

Jérôme said the mistrust of police is often established in childhood.

She said social workers for the government’s youth protection agency ask too much of Aboriginal parents and are too quick to seize children from their homes.

She testified youth protection workers are often accompanied by police on home visits.

“Our children are afraid of police,” she said. “When they see a police car, they burst into tears inside their homes.”

She said policing, education, social, health and psychological services are all chronically underfunded.

Jérôme said the First Nations communities are left begging for money, and they’re often caught between two levels of government.

A woman holds up a sign in support of aboriginal women at a march on Saturday in Val-d’Or, Que. ( Sandra Ataman/Radio-Canada)

Several hundred people marched through the rainy streets of Val-d’Or, Que., last night to show their solidarity with the aboriginal women who have come forward with a series of grave accusations against Quebec provincial police.

“The message is a message of love,” said organizer Manon Richmond.

Earlier this week, Radio-Canada’s investigative program Enquête aired a story about aboriginal women in the northern community alleging they were abused and sexually assaulted by provincial police officers.

According to the women, police officers routinely picked up those who appeared to be intoxicated, drove them out of town and left them to walk home in the cold.

Some allege they were physically assaulted or made to perform sex acts.

The eight officers allegedly involved are under investigation and have either been put on leave or transferred to administrative duty.

Quebec Public Safety Minister Lise Thériault said Friday her office had been aware of the investigation since May, but told reporters she was “just as shocked as the rest of the population” when she learned of the details on Enquête.

The probe has been handed over to Montreal police from the Sûreté duQuébec, so that officers would not be investigating members of their own force.

Val-d’Or Mayor Pierre Corbeil said the allegations have shaken the community. He said it was important for residents to come together to denounce violence.

At the march, one supporter held a sign “demanding justice” for the women who went public.

One woman taking part said she wanted to show her support for “the brave women who told their story.”

With files from Radio-Canada’s Sandra Ataman

A group of about 40 protesters spent Saturday demonstrating in front of Marvin and Terry McComber’s house in Kahnawake, Que.

Marvin’s wife Terri is not Native, so according to Kahnawake’s membership law, the McComber’s are not allowed to live in Kahnawake.

Terri moved to Kahnawake 26 years ago, when she married Marvin, who grew up there and their three children are all Mohawk.

The protesters say the couple is breaking a law that has been on the books in Kahnawake since 1981. It states that any Mohawk resident who marries or lives with a non-native must move away from Kahnawake.

The law also states that people cannot be evicted between Nov. 1 and May 1, which led a grassroots organization in Kahnawake to declare May 1st to be “Moving Day” for non-Native people living in the community.

Protesters say the couple is breaking a law that has been on the books in Kahnawake since 1981.

Nineteen-year-old resident Keisha Goodleaf was among the protesters outside the McComber home.

“Well I am here because I was raised [knowing that] you marry out, you get out. We all knew that. Everyone in town grew up knowing that,” Goodleaf says.

She says she is worried about losing native land, language and culture.

Also taking part were three Mohawk Council of Kahnawake chiefs. Chief Carl Horn said that the law was put in place for the good of the community and to protect Mohawk lineage for generations to come.“We might end up as a municipality. I wanna make sure Kahnawake stays Mohawk land forever,” said Horn.

“I grew up with Marvin,” said Timmy Montour whose brother-in-law was protesting 30 metres away. “Me being here today is going to cause problems for me later on, but I choose to be here because it’s (evictions) wrong. Anytime you’re hurting somebody, you’re doing something wrong.” The McComber’s are being targeted for other reasons are well said protester Ohontsakate Montour .

“The person who is illegally living here (Terri and Marvin McComber) is also in a lawsuit against the community that threatens our rights to self-governance, and threatens to take community funds from all aspects of the community,” said Montour.

Seven mixed-race couples, including the McCombers, are taking the band council to court over the membership law, in a case that is not expected to be settled until 2017. 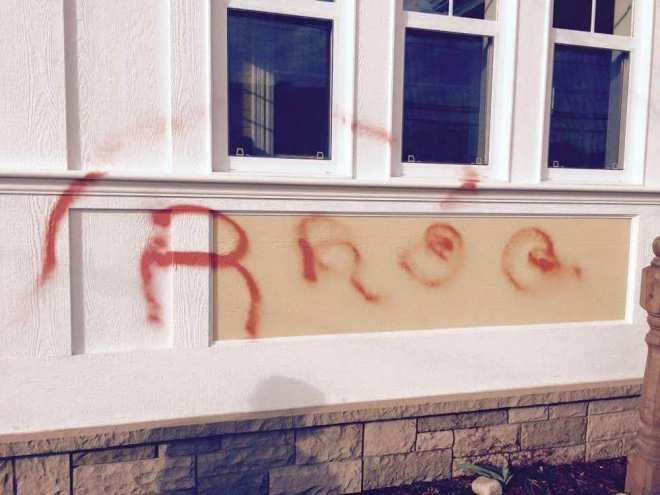 The home Terri and Marvin McComber in Kahnawake was vandalized on Friday, May 1, 2015.

But as the May 1st deadline passed, what had been billed as a peaceful protest outside the McComber’s home was overshadowed by vandalism that occurred overnight.

The McComber’s woke up Saturday morning to spray-painted graffiti on the front of their two-storey yellow house, and on their daughter’s car.

“You can only imagine the pain and the tears,” McComber, whose children, age 24, 18 and 8, also live in the house. 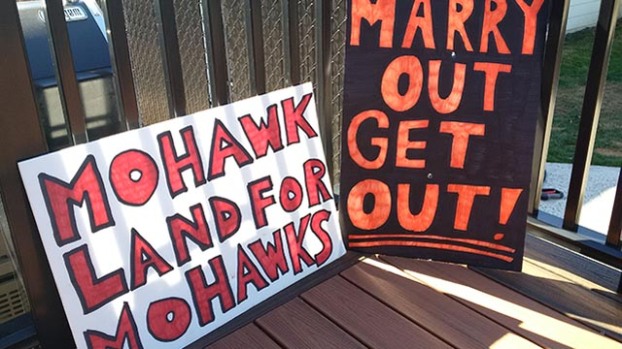 Signs placed at the McComber’s home said: “Marry out get out” and “Mohawk land for Mohawks.”

However, Waneek Horn-Miller, who is part of the group that launched legal action against the council to strike down the residency law, said the Mohawk Council of Kahnawake isn’t backing up its words.

“I’m calling out the Mohawk Council of Kahnawake for not doing their job of creating a harassment-free, bullying-free environment,” said Horn-Miller, who is currently living in Ottawa, where her non-native partner, Keith Morgan, is finishing a medical residency. “They failed because this is not the first time it happened that someone vandalizes or leaves signs on property.”

Horn-Miller said while she was building a house in Kahnawake, someone left a sign on the property saying: “Go back to LaSalle, white man” — directed at her partner.

The anonymous nature of the acts of intimidation, such as the vandalism at the McCombers’ home on the weekend, creates an environment of terror, Horn-Miller said.

Band council spokesman Joe Delaronde says he does not condone the vandalism, but the protesters have a right to demand the law be respected.

It has been more than seven years since Maisy Odjick and Shannon Alexander went missing.

The teens, aged 16 and 17 respectively, left Alexander’s house in Kitigan Zibi near Maniwaki, Que. without their belongings – including wallets – on Sept. 5, 2008.

Their families still do not know if they are alive or dead.

“It’s disheartening knowing that we don’t have answers,” said Maria Jacko, Odjick’s aunt. “What more can be done right now?”

Jacko is at least hoping that a roundtable on missing and murdered aboriginal women in Ottawa on Friday will help launch an inquiry into what she calls a “national crisis.”

The national roundtable will bring together delegates from federal, provincial and territorial governments as well as the Assembly of First Nations, the Congress of Aboriginal Peoples and the Native Womens’ Association of Canada.

“I think it’s a good start,” Jacko said. “I’m hoping that the government will see this and see this as an initiation as some sort.”

In May, RCMP released a report that found 1,181 police recorded incidents of missing or murdered aboriginal women between 1980 and 2012.

Also on Friday, Carleton University will hold a peoples’ gathering on the same topic from 9 a.m. to 5 p.m. That talk will include elders, families of missing and murdered aboriginal women and girls and health supporters.

Anyone can attend and registration is free.

There will be a closed gathering of family members of missing and murdered Indigenous women and girls the previous night, on Feb. 26.

– With files from Torstar 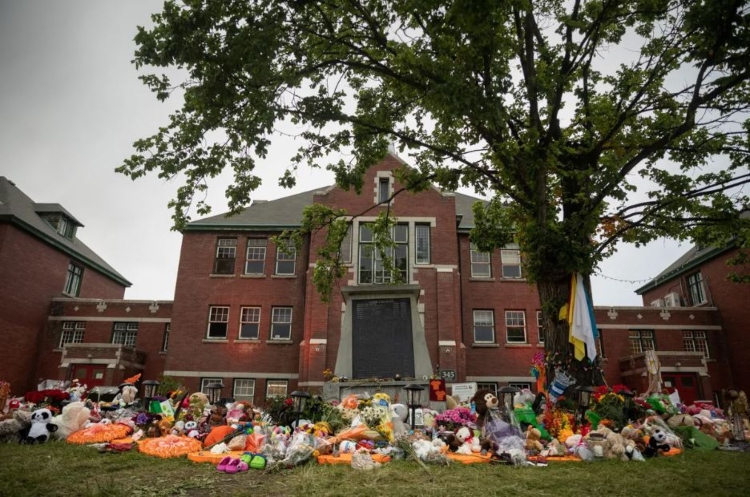