18 suicides this year among members of the Nishnawbe Aski Nation

Indigenous leaders in Northern Ontario say community workers are exhausted and their children are dealing with tragedy upon tragedy after four more young people – three of them under the age of 16 – took their own lives in the past week.

The deaths bring the number of suicides this year among members of the Nishnawbe Aski Nation, a collection of 49 First Nations with a combined population of about 45,000, to 18 since the start of the year. Half of those who died were between the ages of 10 and 15, including three young girls who lived in the same small and remote community of Wapekeka.

“We’re overwhelmed, first of all, and the message that we keep hearing over and over again from our leadership and our front-line workers is that they’re exhausted and just trying to keep kids alive,” Alvin Fiddler, the Grand Chief of the Nishnawbe Aski Nation said in a telephone interview on Thursday. 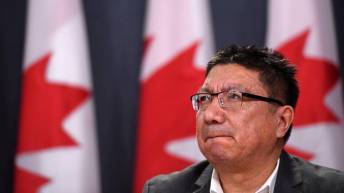 Alvin Fiddler, Grand Chief of the Nishnawbe Aski Nation, shown in this 2016 photo.

“We’ve become experts in crisis management,” Mr. Fiddler said, “and what we’re looking for now from different governments, provincial and federal, is some long-term sustainable strategies moving forward because we need to move beyond the crisis state we’ve been in for so long now.”

The most recent string of deaths began with two children in Pikangikum over the weekend. One was a boy who was said to have been 10 or 12 years old. The other was a girl who was 12.

Then, on Tuesday, a 15 year-old-girl killed herself in the community of Summer Beaver.

And on Thursday, a 21-year-old man from the Fort Severn First Nation killed himself in Thunder Bay, where he had gone to obtain medical treatment.

Suicide and self-inflicted injuries are the leading cause of death of First Nations people under the age of 45 and the suicide rate for First Nations male youth is five times the national average.

Officials with the Nishnawbe Aski Nation say the numbers in their region are probably even higher than what has been reported because not all suicides are recorded as such or gain attention.

But the deaths in Wapekeka of 12-year-old Chantell Fox and her friend, Jolynn Winter, which occurred two days apart in January of this year, made national headlines, as did the suicide of 12-year-old Jenara Roundsky in June.

Leaders of that community say they told the federal government last summer that they were hearing about a suicide pact among their young people but a request for help garnered no immediate response from Ottawa.

Since the deaths in January, more federal assistance was provided. Health Canada says it is now paying more than $900,000 annually for mental-wellness programs in the fly-in village of 430 people. That includes $380,000 for four youth mental-health workers who were requested by the community.

But the people of Wapekeka remain anxious about the safety of their youth. On June 19, fearing further loss of life, Wapekeka declared a state of emergency. And the latest deaths are a reminder that children in other communities are also at risk.

“I understand that kids as young as 10, 11 and 12 in Wapekeka feel that they need to go out into the community, to patrol the community, with knives in their pockets so they can cut down a peer or friend who has tried to hang themselves,” Mr. Fiddler said. “That’s really sad. I can’t imagine a child that has to live like that.” 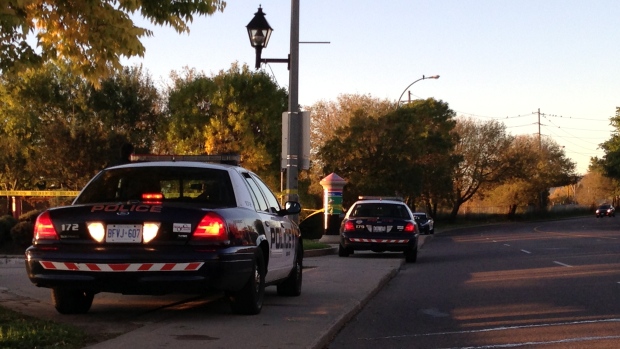 Police didn’t start a criminal investigation into 15-year-old Jethro Anderson’s disappearance from this Thunder Bay, Ont., park until six days after he was reported missing in October 2000. (Adam Burns/CBC)

An inquest into the deaths of seven First Nations students in Thunder Bay, Ont., is providing a preview of concerns that could be raised at a national inquiry into missing and murdered indigenous women, says a lawyer for the Nishnawbe Aski Nation.

The inquest, one of the largest in Ontario’s history, started on Oct. 5 and is scheduled to run to March 2016.

It’s looking at the deaths of students who died between 2000 and 2011 while attending high school in Thunder Bay. Few remote First Nations in northern Ontario have schools that go beyond Grade 10.

“Sadly there’s a theme — less than worthy victims,” lawyer Julian Falconer said after cross-examining an officer with the Thunder Bay police at the inquest.

“It’s a theme that ties into not just this case but the entire picture around missing and murdered indigenous women and girls: less than worthy victims, I can sadly say this is part of that bigger picture,” he said.

The retired police officer testified at the inquest that Thunder Bay police did not launch a criminal investigation into the death of Jethro Anderson until six days after he was reported missing in October 2000.

The body of the 15-year-old was pulled from the Kaministiquia River in Thunder Bay on Nov. 11, 2000, nearly two weeks after he disappeared.

Anderson, from Kasabonika Lake First Nation, was staying with his aunt, Dora Morris, while he attended the First Nations high school in Thunder Bay.

Morris told the inquest that she called Thunder Bay police about her nephew’s disappearance within hours of him missing curfew, but her concerns were not taken seriously.

“I called every day just to ask if they had any leads,” Morris told CBC News in an interview after she testified. “And every time I called, the answer was always, ‘He’s just out there partying like any native kid,’ those kind of comments.”

Jethro Anderson of Kasabonika Lake First Nation died in 2000 while attending high school in Thunder Bay. He was 15. (CBC)

The comments, along with a police news release saying no foul play was suspected in Anderson’s death sent out prior to a post-mortem, show police had “tunnel vision” when it came to the investigation, Falconer said at the inquest.

“The police have a tendency to default to a drowning and liquor scenario, literally, almost automatically,” Falconer said of the investigations of five students whose bodies were pulled from local rivers, as well as other similar recent deaths of First Nations people.

Morris said she still does not believe the police conclusion that her nephew drowned, but she’s uncertain whether the inquest will solve the mystery she believes still exists surrounding his death.

She hopes, however, that by speaking out changes will be made to keep First Nations youth safe in the city.

“Like if things happen like this again, that they would start searching right away and do investigations,” she said.

Falconer, who represents the Nishnawbe Aski Nation, said the revelations that have already come out at the First Nations student deaths inquest point to the need for a regional component in a national inquiry into missing and murdered indigenous women.

“Thunder Bay is a perfect example,” he said. “We need to have a local process for identifying the deaths and asking the kinds of tough questions that were asked today, [because] aboriginal communities continue to be concerned that when something happens to their people, it’s not treated with the same gravity or importance.”

In their election platform, the Liberals committed to “immediately” launch a national public inquiry into missing and murdered indigenous women and girls in Canada.

The party said it would seek recommendations for governments, law enforcement and others to help “solve these crimes and prevent future ones.” It also promised to spend $40 million on the study over two years. 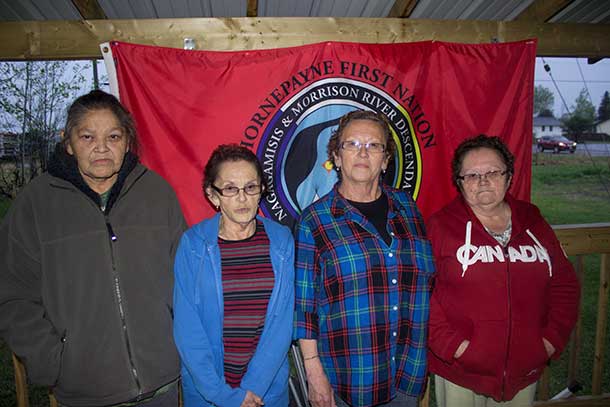 Elders from the Hornepayne First Nation have been occupying the NAN Head Office on Fort William First Nation since April 8 2015.

Since April 8 2015, Elders from the Hornepayne First Nation have been occupying the Financial Head Office of the Nishnawbe-Aski Nation, located on the Fort William First Nation.

The dispute is over the recognition of the Hornepayne First Nation election.

NAN has been protesting the occupation of their offices. The issue is ramping up now as NAN Corporate Services c.o.b. as Nishnawbe Aski Nation have filed suit in the Ontario Superior Court of Justice against Ron Kocsis and the Hornepayne Elders.

The suit seeks an order from the court prohibiting the Elders from being present in the NAN Head Office as well as the NAN Offices on Victoria Avenue, in Thunder Bay.

NAN is also seeking “An interim and final Order that the Anishinabek Police Service, the Thunder Bay Police Service, the Ontario Provincial Police, and all other police officers in Ontario shall assist the plaintiff in enforcing the Order, and more particularly that the said police officers shall use such means including physical force, as are reasonably necessary to enforce the Order…”

The core of the issue starts with the election of the Hornepayne Chief and Council.

NAN stated in a letter to both Ron B. Kocsis and Laura Mederios that, “NAN cannot recognize a Hornepayne Chief until the leadership dispute has been resolved, whether by a final court order or a written agreement. Until that happens no representative from Hornepayne can be registered as NAN member for voting”.

The Elders from Hornepayne content that Chief Laura Mederios has not held and election for over ten years, and that a legal and binding election was held.

In earlier coverage, NetNewsLedger reported on April 17th, “Nishnawbe Aski Nation (NAN) Grand Chief Harvey Yesno released the following statement in response to the Hornepayne First Nation election dispute where Mr. Kocsis and a following of people refused to leave the NAN corporate office in Fort William First Nation April 8, 2015 and April 9, 2015. “At this time NAN does not recognize a Chief in Hornepayne until the unresolved leadership dispute between groups represented by Ms. Medeiros and Mr. Kocsis have been resolved.

NAN must remain neutral and cannot favour one group over the other. This will be the NAN position until there is a mutual written settlement or a final court order.”

Both parties were informed by letter February 3rd, 2015 that each First Nation has the responsibility to resolve all internal governance matters via independent mediation at the First Nation’s cost.

NAN does not agree with Mr. Kocsis’ disruptive tactics and was disappointed when Mr. Kocsis refused to attend a meeting organized by the NAN Executive Council for 4pm on April 8 to discuss the issue. NAN staff have been intimidated and work processes have been effected by the occupation.

The issue will now move to the Ontario Superior Court of Justice in Thunder Bay on May 26th 2015.