First Nation leaders in Manitoba have shared that hundreds of Manitoba First Nation citizens have always been neglected in some aspect when it comes to health services.

First Nation leaders are making a plea to the provincial and federal governments to take concrete action to reduce and eventually eliminate anti-Indigenous racism in Canada’s health care system.

“It is hard to believe that in this day and age, we have to talk about racism,” said Grand Chief Garrison Settee, Manitoba Keewatinowi Okimakanak (MKO) Inc. in a press conference on Facebook Live on Tuesday.

“I thought that we as a nation have evolved to a place that we are more tolerant and accepting of one another, but in our health care system, that is not the case. Anti-Indigenous racism is apparent, and stories from our First Nations confirm that it does exist.”

Organizations such as MKO and KIM have voiced out their frustrations as their members continue to face mistreatment in hospitals and nursing stations.

It has even come to a point whereby First Nations would rather suffer quietly in their own homes because they know they will not receive adequate health services as they are continually being doubted by health officials.

“No one should be doubted when they are looking for medical attention. They should be treated with respect and compassion. That is all we want,” said Chief Shirley Ducharme, O-Pipon-Na-Piwin Cree Nation.

That day, Wood quickly brought her to the nursing station in South Indian Lake where a nurse attended to her for less than five minutes.

The nurse diagnosed her and stated that since her leg does not appear to be broken, Wood should return home with his wife and schedule a flight to Thompson so that she can be reassessed the next week.

When they got home, her leg started to swell and turned blue. Not trusting the nurse, he decided to call Ducharme about his dilemma. After speaking with her, he managed to approve his wife as an outpatient. Immediately, he and his wife drove four hours to Thompson so she could receive proper care.

“The health staff there noticed that she wasn’t doing very well. They took her to the emergency room right away and did some x-rays. They found that there were two fractures in her leg and that there was something wrong with her knee,” said Wood.

She was later sent to Winnipeg via medevac so that she could receive surgery. As of now, she is recuperating in Thompson with a 14-inch scar on her leg.

Wood noted that this is only an example of First Nations people who cannot access medical care in their home community due to negligence. 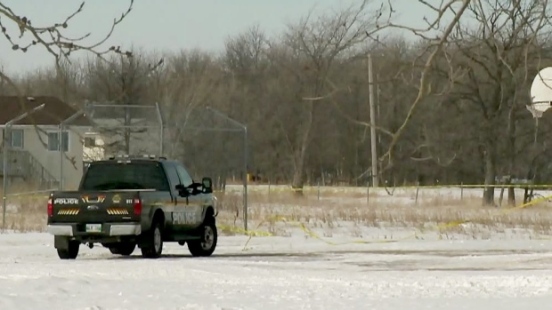 According to CTV News, Chiefs from the Birdtail Sioux, Dakota Tipi, Long Plain, Roseau River Anishinabe, Sandy Bay Ojibwaym Swan Lake, and Waywayseecappo First Nations made the declaration to raise awareness about the rise in drug abuse among their communities, including the use of opioids, crack cocaine and methamphetamine.

There are about 20,000 people in the affected communities.

“In the last year in my community, 60 per cent of our children born were put on morphine after birth because of the addictions of the mothers,” – Ken Chalmers

Although the chiefs said they’ll be working to combat the crisis through a new strategy of education, prevention, and enforcement, they’re calling for government action at the provincial and federal levels to help in creating an addiction treatment facility.

“We need a treatment centre in our communities,” Francine Meeches, chief at Swan Lake First Nation, told CTV Winnipeg. “[In] one of our communities, somewhere, we need healing centres. Somebody owes us that.”

The chiefs have also pledged to work with police in preventing drugs from coming into communities and exile band members who are caught selling drugs.

Sheila North Wilson, grand chief of Manitoba Keewatinowi Okimakanak, speaks to media at a press conference in Winnipeg on March 18, 2016.

Sheila North Wilson, who represents northern Manitoba First Nations, told a First Nations health conference in Saskatoon that some indigenous leaders in Saskatchewan might dispute that.

She says she was offended that Pallister said Manitoba indigenous people have the most chronic diseases and mental health issues.

She says they’re pushing the Manitoba government to sit down with elders and youth to discuss their health-care needs.

“Well, thank you for calling us crazy and sick. I took offence to that.”

“He claimed in the national media that we have the most chronic diseases and mental health issues,” North Wilson said Tuesday.

“Well, thank you for calling us crazy and sick. I took offence to that.”

In January, Pallister came under fire from indigenous leaders and opposition politicians for saying that tensions around night hunting were leading to a race war.

He said he chose his words poorly but didn’t apologize for saying it. A Supreme Court ruling a decade ago upheld the indigenous right to hunt at night, subject to safety regulations.

A government report says $2 billion is needed to eliminate mould and overcrowding in homes on Manitoba reserves. (FILE PHOTO)

Internal government documents say Manitoba First Nations live in some of the most dilapidated homes in the country and it will cost $2 billion to eliminate mould and chronic overcrowding in that province alone.

That’s almost 13 times more than the $150 million the federal government has budgeted for housing on all reserves across Canada this year.

Reports from Indigenous and Northern Affairs Canada, obtained by The Canadian Press under access-to-information legislation, say the housing situation in Manitoba has worsened as infrastructure funding has been siphoned off to other areas.

The report notes Manitoba has among the highest percentage at 29 of indigenous people living in poor housing in Canada. Officials say Alberta is the only other province in a similar situation.

One quarter of existing homes on reserves in both provinces need to be repaired or replaced.

Chief David McDougall said the situation is a “ticking time bomb” in his remote aboriginal community of St. Theresa Point in northern Manitoba. The waiting list for housing on the cluster of four reserves in his tribal council is 1,500. Last year, his reserve got 18 units.

They were the lucky ones. Other reserves got less than that.

It’s not uncommon for 18 people to live in a small bungalow, McDougall said. Last year, there were 23 people living in a two-bedroom home.

“They had to take turns sleeping.”

While the government’s own estimates put Manitoba’s housing needs at $2 billion, the department said $50 million is budgeted for on-reserve housing in the province this year.

That is to drop to $29 million next year.

Some reserves can build additional homes with a ministerial loan guarantee, but McDougall said that isn’t available if the reserve is under third-party management. The department’s internal report said only 30 per cent of Manitoba reserves operate independently.

People on McDougall’s reserve are losing hope, he said. Suicides are on the rise while others turn to a homemade alcoholic concoction called “superjuice.”

The federal government spent the last few years hooking up the reserve’s homes to water and sewer, but McDougall compared that to putting new tires on a rusty, decrepit car.

“We need to find a proper, sustainable solution — what is realistic in terms of how we can begin to even make a dent in this huge backlog.”

Indigenous Affairs Minister Carolyn Bennett said she’s not deterred by the $2-billion price tag. She couldn’t explain exactly how the new Liberal government will tackle the backlog, but said improving First Nations housing is a priority.

“I’ve been in those homes,” Bennett said in an interview. “It is a disgrace for Canadians to watch. There is a consensus in this country that we have got to get going on this.

“The sticker shock on any of these things can’t get in the way of us beginning what has to happen.”

Leilani Farha, United Nations special rapporteur on the right to housing, said her predecessor conducted a in-depth investigation in 2007 which evaluated the adequacy of on-reserve housing. He concluded “we have a crisis on our hands,” she said.

“It will cost money but there is money in one of the wealthiest countries in the world,” Farha said in Ottawa Monday. “That is the standard to which Canada needs to be held.”

Ottawa has been warned before about the housing situation on Manitoba reserves. A 2011 internal assessment of on-reserve housing said communities don’t have the means to maintain the homes they have, which often require “aggressive maintenance.”

“The consequences are manifold: maintaining housing stock is costly, poorly maintained housing is unsafe and contributes to poor health, which in itself generates additional costs,” stated the report.

An evaluation three years before found people on reserves were living in homes that were “falling apart” and rife with mould, which made them “not suitable for people with breathing problems.” It noted two people died in one community “related to wiring and lack of heat. People were using a dryer to help heat a home.”

Craig Makinaw, Alberta regional chief with the Assembly of First Nations, said the situation is dire for some First Nations. While some reserves with a source of income can afford to go above and beyond government funding, residents on other Alberta reserves wait up to 30 years for a home, he said.

“All the cuts that have happened over the years have caused this backlog,” he said. “It needs to be addressed because it’s not going to get any better.”