Kanesatake Grand Chief Serge Simon, right, says he will agree to meet with Oka Mayor Pascal Quevillon if he apologizes for comments he made about property values dropping if Oka becomes ‘surrounded’ by Mohawks. (Ivanoh Demers/ Radio-Canada)

Kanesatake Grand Chief Serge Simon passed on an opportunity to meet Oka Mayor Pascal Quevillon Friday, after the mayor refused to apologize for inflammatory comments he made about his Mohawk neighbours earlier this month.

Simon said he would meet face-to-face with Quevillon if he apologized for saying property values would drop in Oka, Que., if a proposed parcel of land in the municipality is formally transferred to Kanesatake, leaving Oka residents “surrounded” by Mohawks.

On Friday morning, Quevillon refused to do so — telling Radio-Canada that he would only be apologizing “for telling the truth.”

Speaking after a meeting with representatives of the federal and provincial governments to discuss the proposed land deal Friday, Simon said with no apology forthcoming, he’s “cutting off communication” with Quevillon.

Quevillon is opposed to an offer from a local developer to transfer 60 hectares of land to the Kanesatake Mohawks through the federal government’s Ecological Gifts Program and sell them an additional 150 hectares.

The deal would see Kanesatake take ownership of more of the area Mohawks refer to as The Pines — the same contentious undeveloped property that became the focus of international attention 29 years ago, when a 78-day armed standoff was sparked by the town of Oka’s plan to expand its municipal golf course.

Oka Mayor Pascal Quevillon said Friday morning that he does not intend to apologize for his comments. (Charles Contant/CBC)

In an interview with La Presse earlier this month outlining his opposition to the proposed land transfer, Quevillon said that Kanesatake is plagued by illegal dumps, cannabis and cigarette merchants, and contaminated water.

He said if the day comes that Oka loses jurisdiction over the disputed land to the Mohawks, there could be another Oka crisis — but this time it would be the people of Oka rising up against the Mohawks. 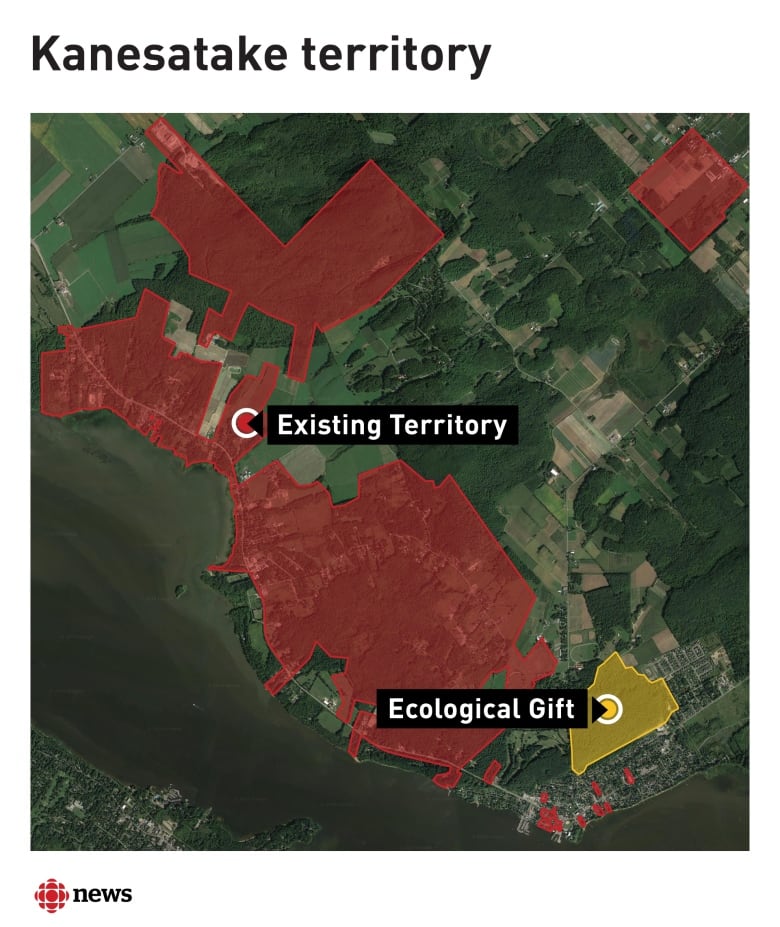 Representatives of both the federal and provincial governments are treading carefully, promising to listen to the concerns of all sides in the dispute.

A separate meeting between those federal and provincial government officials and the Oka mayor was set for 11 a.m.

Simon had said he was prepared to meet with Quevillon in between those two meetings to discuss their differences, if by then he’d received the apology he’s seeking.

Emerging from the meeting at 11 a.m., Simon doubled down on his refusal to meet Quevillon, saying the two are at an “impasse.”

“My council and I decided that we’re not going to give this mayor any more importance than he’s looking for,” Simon said. “He made it clear this morning he’s not going to apologize.”

Simon said that he’s not planning on cutting ties with any other mayors in the Regional County Municipality (MRC) of Deux-Montagnes, a wide swath of territory that includes Oka, all of which is part of the Kanesatake Mohawks’ unsettled land claim. He said other mayors in the MRC are more “respectful.”

Seven of those MRC mayors, including Quevillon, held a meeting by telephone conference Thursday, passing a resolution in support of the town of Oka. They called on all levels of government, including the community of Kanesatake, “to work in close collaboration in order to plan for the land use and development of the territory in a harmonious, reconcilable and coherent fashion.”

Grand Chief Serge Simon met provincial and federal politicians, along with the Quebec regional chief of the Assembly of First Nations, Ghislain Picard, in Montreal on Friday. (Kate McKenna/CBC)

No place at table for Oka, says AFN chief

After Friday’s meeting, Picard said questions around the proposed land transfer should only be a matter of discussion between the Mohawk Council of Kanesatake and the federal and Quebec governments.

The municipality of Oka has no place in those talks, Picard told reporters.

“Municipalities in Quebec are governments of proximity, and they’re not in a position to interfere.”

As for the mayor of Oka’s suggestion that the land transfer could trigger another crisis, Picard called that misinformation that’s simply exacerbating tensions.

“I think the only ones speaking about another crisis [are] the mayor of Oka and yourselves, as media,” the AFN chief said.

“We haven’t given that impression or that perception on the part of our communities.”

Picard said the proposed land transfer is being made as a gesture of reconciliation and would be a way to “level the playing field” between Oka and the neighbouring Mohawk community.

“The economic opportunities are not the same, and that has to change,” he said.

For his part, the mayor of Oka is asking the provincial and federal government for compensation in return for a moratorium on development of the disputed land in order to put an end to tensions over unresolved land claims.

Speaking to reporters before his own meeting with government officials Friday, Quevillon conceded that his choice of words had caused some people to become upset but said he didn’t intend to make amends.

“I maybe didn’t use the words that some people would have liked me to use,” he said.

He seemed unaware of exactly which comments had left Simon feeling hurt and insulted.

Inquests to be held into Saskatchewan stabbings, death of suspect in custody