First Nations leaders are outraged the Alberta government is rushing to pass Bill 1, which would outlaw protests and other disruptions to “critical infrastructure.”

Arthur Noskey, Grand Chief of the Treaty 8 First Nations of Alberta, said the Critical Infrastructure Defence Act violates Indigenous and treaty rights, calling it a “racialized bill,” and one that will aggravate tensions between police and Indigenous people.

“We knew this bill was enacted because of Wet’suwet’en protests,” said Noskey, referring to the First Nations-led demonstrations that lasted several weeks this year across Canada. The protests drew thousands of supporters, with some blocking highways and railway infrastructure in opposition to Coastal GasLink’s LNG pipeline slated to run through traditional Wet’suwet’en territory in B.C.

“The intent of this bill is racially targeted towards First Nation treaty partners in this country. With all of the racial tension happening today, the [United Conservative Party] government should realize this bill is not going to work,” said Noskey. “Under treaty, we have collective, inherent rights. When people come together to protest, it’s because of their collective rights.” 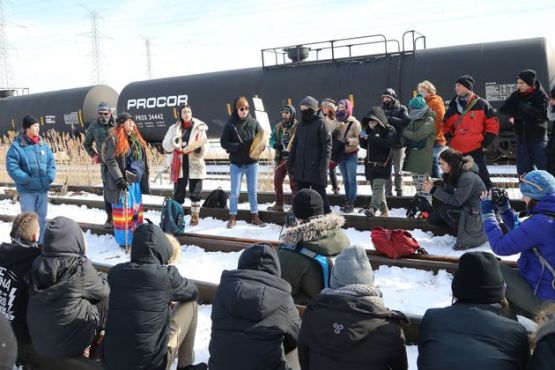 Hundreds of protesters occupy the Macmillan Yard in Vaughan, Ont. on Feb. 15, 2020 in solidarity with traditional Wet’suwet’en leaders opposed to an LNG pipeline through their territory.

The bill bans demonstrations at “critical infrastructure” areas, described as pipelines, oilsands sites, mining sites as well as utilities, streets, highways, railways, and telecom towers and equipment. Violators who protest, trespass, interfere with operations, or cause damage around that kind of infrastructure will face fines as high as $10,000 or six months in jail or both. Further offences will garner fines of up to $25,000 and jail time.

Bill 1 passed its third reading on May 28 and now awaits royal assent from the lieutenant-governor that would make it a law.

This is a desperate move by Premier Jason Kenney to save a “completely failing economy and energy system,” said Eriel Deranger, a member of the Athabasca Chipewyan First Nation in northern Alberta and executive director of Indigenous Climate Action.

“Bill 1 seems like it’s out of the same playbook as [U.S. President Donald] Trump. It’s fascist, anti-democratic, anti-civil rights and completely annihilates the rights of Indigenous communities,” she said.

“I think people will protest this bill given where we are in the world with the Black Lives Matter movement, and this bill has impacts across the nation. I hope the federal government intervenes and sees the true colours of this unconstitutional move by Alberta.”

The office of the Minister of Justice and Attorney General said in a statement to HuffPost Canada that it wouldn’t be “appropriate to speak to provincial legislation.”

“We remain fully committed to introducing legislation to implement the United Nations Declaration on the Rights of Indigenous People (UNDRIP) by the end of 2020,” it said.

One of UNDRIP’s authors, Cree lawyer, Indigenous rights expert, and former Alberta MP Wilton Littlechild said the declaration plays a crucial role in protecting and upholding Indigenous rights when it comes to Bill 1.

He says the bill is wide in scope and wonders if the Critical Infrastructure Act also applies on reserve and in traditional Indigenous territories.

“Utility lines, roads, railways, pipelines all go through reserves and nothing mentions this in the bill,” said Littlechild. “There’s no mention of us at all. It’s a complicated matter and we weren’t at the table for free, prior and informed consent on these serious issues.”

Jonah Mozeson, senior press secretary to the Alberta Justice Minister and Solicitor General, saidthe province ”will work collaboratively to ensure that input from Indigenous and Metis Albertans are heard and are scheduling additional outreach to receive additional feedback and discuss the concerns being raised.”

But Assembly of First Nations Regional Chief of Alberta, Marlene Poitras, who has participated in countless demonstrationsf or Indigenous rights in Canada and around the world, said the discriminatory elements in government law-making has to stop.

“We have a human right to voice our concerns. In our case, we have a treaty right and that’s not being respected,” explained Poitras, who marched alongside Greta Thunberg in Montreal last fall to bring awareness to climate change.

“Our people are concerned about the environment. Alberta is deregulating everything and doing whatever it can to open it up for oil and gas development without consulting our people — but our people will respond.”

There’s no chance of reconciliation with the UCP government with this.Arthur Noskey, Grand Chief of the Treaty 8 First Nations of Alberta.

Noskey said he thinks Bill 1 further strains the relationship between police and Indigenous Peoples, mirroring an international narrative that’s dominating headlines. Protests have swelled in the U.S. and around the world against anti-Black racism and police brutality.

“Now, Alberta will be asking the peacekeeping police officers to arrest us. This is anti-racial law. So the racially motivated police in the force will say ‘I can do this’ (arrest and brutalize).”

Last week, his friend and colleague Chief Allan Adam of the Athabasca Chipewyan First Nation told a news conference that he was beaten and his wife “manhandled” during an arrest by RCMP in Fort McMurray. Alberta’s independent police watchdog is investigating the allegations.

Prime Minister Trudeau said he was “deeply alarmed” by the incident and vowed to “do more” to address systemic racism in policing.

“You’re going to criminalize the First Peoples of this land who agreed to share the lands with foreigners that came in. This impacts our way of life. There’s no chance of reconciliation with the UCP government with this.”

By Brandi Morin, On Assignment For HuffPost Canada