A group that has been camped out at Indigenous and Northern Affairs Canada offices for two weeks marched down Yonge St. Friday to demand government action on northern Ontario’s suicide crisis.

Beneath Friday’s pouring rain and dark skies, a group of Indigenous women continue the fight against northern Ontario’s suicide crisis outside the offices of Indigenous and Northern Affairs Canada on St. Clair Ave.

They’ve been at it for more than two weeks. Geoffey Daybutch, who was asked to join the women outside INAC three days earlier to serve as a male voice from the First Nations community, stands guard as a man brushes past him with groceries and tells him to get off the sidewalk.

For Daybutch, this crisis hits close to home.

“The stories that are coming out from the suicide crisis is that some of the older children from the families are making their choice to commit suicide so that the younger kids will have enough food to eat,” he says, struggling to get the words out.

Daybutch is in Toronto because he too made that choice.

“This is a personal thing that I haven’t told anybody here: that’s why I left my home,” he says, tears in his eyes and barely able to talk.

“When we had my youngest brother, I knew we were struggling so I told my family I’ll come down to the city, I’ll leave so that there’s enough food for everyone. I never came up with the choice to off myself. I made the choice to come down south and make a difference and here I am.” 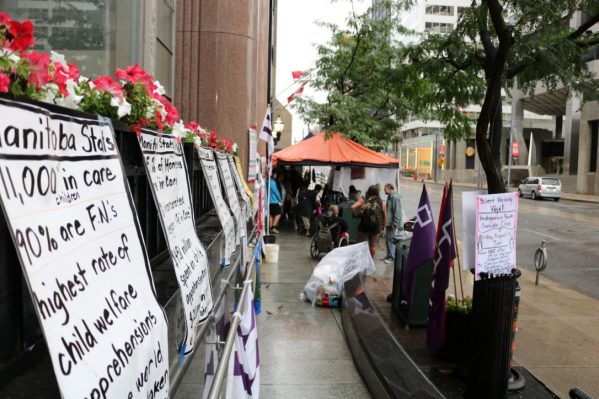 On Friday night, a few dozen activists marched their cause up Yonge St. to the office of Carolyn Bennett, Canada’s Minister of Indigenous and Northern Affairs, in a vigil for the nearly 300 under-20 Indigenous youth who’ve taken their lives in Northern Ontario since 1986.

Once the march began, and two lanes of traffic were blocked, lineups of cars waited patiently while others blared their horns in anger as drum rolls sounded out and flags and signs were carried north on Yonge St.

This is the second time in a year the activists have come to INAC to demand the federal government follow through on an election promise made to address a state of emergency declared last April by the northern Ontario First Nations community of Attawapiskat.

The state of emergency came after 100 people, including children, tried to kill themselves in the community of only 2,000.

On July 24, Indigenous leaders met with the federal government in Ottawa. Another meeting was arranged for September.

Out of the July meeting came four already-promised mental health workers for the northern community of Wapekeka and 20 more for Pikangikum, which is now the suicide capital of the world after five youth suicides last month, according to the vigil’s organizers.

“They have reneged and they’re going to have a meeting in September when they’re finished their holidays and vacation time,” says organizer Sigrid Kneve, two days after someone woke her up in the middle of the night to inform her that another Indigenous youth had taken her life.

This year alone, there have been more than 20 suicides in the Nishnawbe Aski Nation, which is located in northern Ontario and represents 49 First Nations communities.

“Since that meeting when they decided to have the meeting in September, another young person has killed themselves,” adds Kneve. “We want them to do something now! We don’t understand how it’s out of sight and out of mind.”

Outside their sidewalk tent, Toronto police frequently visit, stopping to check in and make sure they’re OK.

Bennett, too, often meets with them. But they say they are still awaiting action.

“How many young people are going to commit suicide from now until September?” asks Kneve.

For now, Daybutch waits on a sidewalk he has claimed as his own until his friends and family get the support he feels they deserve.

Red Power Media contains copyrighted material. We are making such material available to our readers under the provisions of “fair dealing” in an effort to advance a better understanding of Indigenous – political, economic and social issues. The material on this site is distributed without profit to our followers for educational purposes. If you wish to use copyrighted material for purposes other than “fair dealing” you must request permission from the copyright owner.